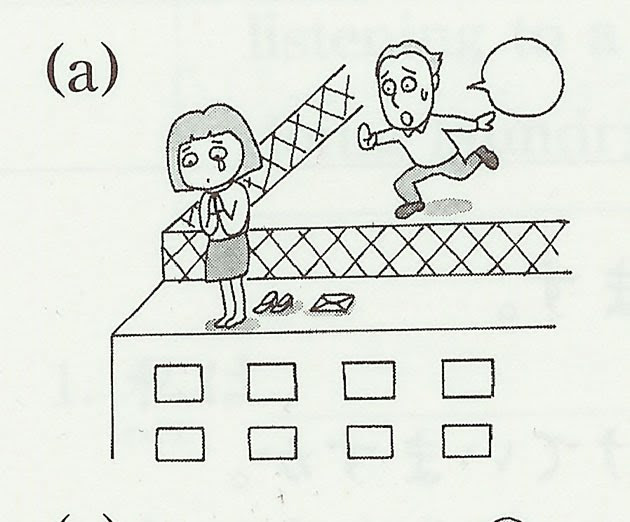 So now if you ever run into a Japanese woman who is attempting suicide, you'll know exactly what to say to her!
(From my Japanese workbook)

And now, a brief look at some of the various "What the crap?" moments in my Japanese textbook:

First up, we have the image above. This is from an exercise in the workbook, where you have to listen to the CD and decide what would be the most appropriate thing for the guy to say. First of all, if I were to encounter somebody about to jump off a building, I wouldn't know what to say in English. Do you even say anything? Or do you just sneak up from behind and pull them away from the ledge? Why didn't my grade school grammar classes include training on how to handle suicide attempts? Is suicide really such a big problem in Japan that this needs to be in a first-level textbook? Most importantly, why did she take her shoes off first? None of this is explained in any way.

Then, as if that wasn't enough, the third chapter of the book:

Holy "low opinion of people who want to learn your language", Batman!

That's right. The third chapter, before you even get to the all-important "asking for directions", is dating! It's almost as if they were saying, "Alright, we know that 99% of you are probably fat, smelly, anime-watching geeks who are only taking this class as part of a futile attempt to score a Japanese chick, so let's cut the crap and get right to the chase." Is this how the Japanese see us?

I'm beginning to think that it is. A few years ago, there was a Japanese family shopping at the local Circuit City. Every time an American came within 20 feet of them, the father would corral his wife and children off to another, more isolated aisle. Of course, there were a lot of Americans in the store, as it happens to be in, well, America. So he kept retreating his family further and further back into the store, until they were all huddled up in the back corner by the stereos, not moving. I have no idea how he managed to find enough of a clearing to get them into the store to begin with. But I digress...

Then, as if that wasn't enough, there was a listening exercise for this chapter that involved a guy asking an American girl out for coffee (gotta reverse the roles so it doesn't look too suspicious, you know), and getting shot down repeatedly. I mean, if you ask somebody out, and they tell you, really slowly, "Uhh... I have to... go home!", you wouldn't exactly need a degree from Sally Struthers to figure out that she means, "Go pound sand, you cretin!". Not this guy, though. No, he just keeps on trying! And trying! And trying some more! Eventually, the girl says goodbye really quickly and runs away, leaving the poor sod shouting, "Mearii-san! Mearii-saaaaaaaaaaaaaaaaaaaaaaaaaaaaaaan!" I'm sure that the voice actor responsible for this had to have recieved an award of some sort for his performance. It's like the ending of Citizen Kane, only better!

Anyway, I'm sure that at this rate, I'm going to get at least six more blog posts out of this thing before next semester is over. In the meantime, I need to put together a presentation on some aspect of Japanese culture. I'm doing one on baseball, although I'm probalby going to be focusing on the Hanshin Tigers, because, well, they're the Hanshin Tigers, dammit! (Curse them for making me into a fan!) I'm secretly hoping that the instructor is a Yomiuri fan, just because it would make for some really amusing looks. It'll be fun!

And now, as promised last time, and just in time for the holiday season, here they are: 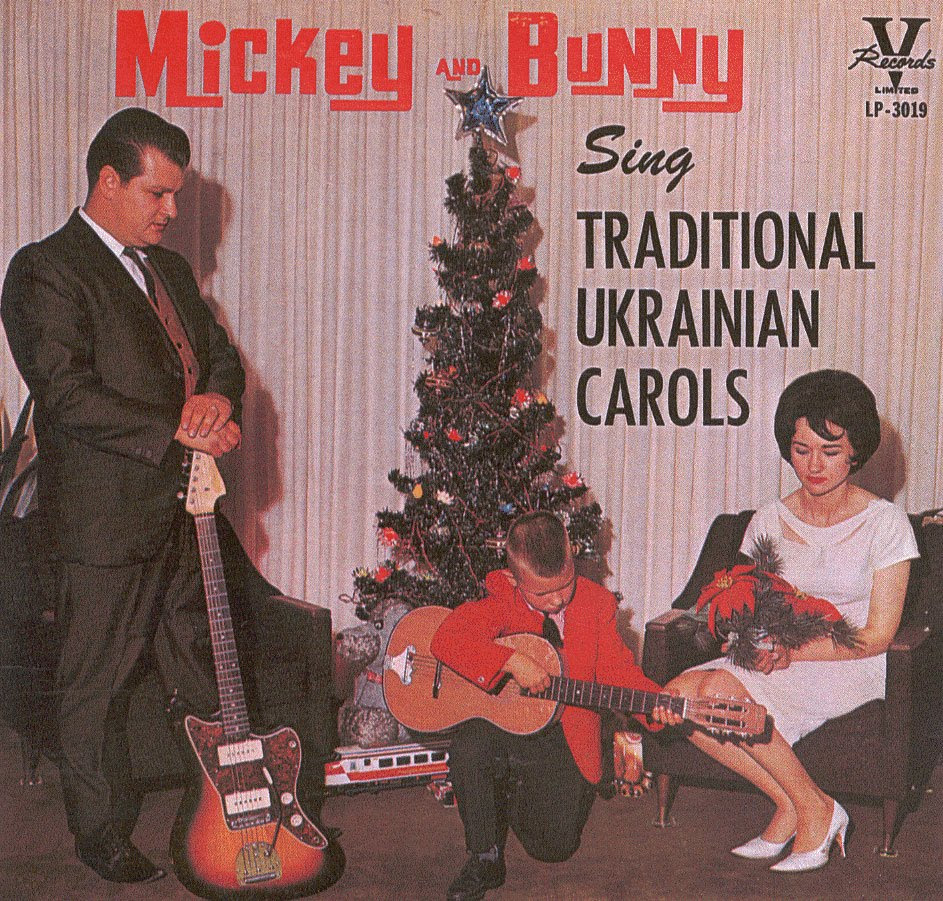 She took her shoes off first because they were not ready to die. Either that or she didn't want to get them scuffed or dirty from the fall. It goes without saying that this woman cares about her shoes---more than she cares about herself, even. My personal favorite touch is the little envelope placed next to the shoes, containing, I assume, her suicide note. Is there a chapter in this book, perhaps after the one about how to save someone from committing suicide, on how to write a suicide note in Japanese? As Kurt Cobain once said, "I hate myself and want to die, but, damn it, I really like my shoes."

Dude what page is that picture on in the Genki text book?!!! I'm looking for it right now!

The Other Guy said...

Also of note is the deadpan delivery of the guy saying "Don't die!" on the CD. Apparently, not only do they take their shoes off when committing suicide, but they also try not to disturb others when stopping someone from doing so. So polite...

The Other Guy
Scranton, Pennsylvania, United States
Oh look, yet another underemployed, 30-something, ponytailed dork with a blog. Haven't seen that a million and twelve times before.